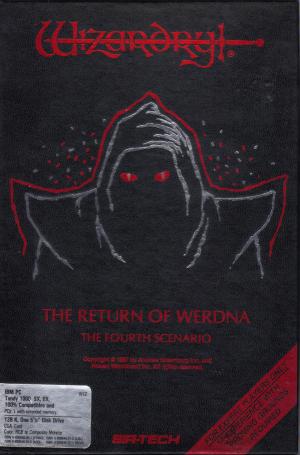 Wizardry 4: The Return of Werdna

The fourth game in the Wizardry series, The Return of Werdna takes a decidedly different approach from all the games that preceded it. Instead of playing as a party of six player-generated characters, the player controls Werdna himself, the evil Archmage from the first game. It seems that after Werdna was defeated by the party of adventurers who stole his amulet, he was imprisoned at the bottom of his ten-level labyrinth in an eternal slumber to be tortured by nightmares for eternity. Although Werdna was supposed to sleep forever, somehow he has awakened, and now he is out for revenge. At the beginning of the game Werdna finds himself in a situation that is singularly unique for most arch-villains: he is stripped of his powers, trapped within his own former stronghold, and filled with the realization that the same traps and monsters he created to keep adventurers out now act as obstacles to his freedom. Werdna will slowly regain his magical powers as well as have the ability to summon helpful monsters to accompany him on his journey and aid him in combat. Unlike other role-playing games, no experience is awarded for defeating enemies. Instead, Werdna can only become stronger by searching for pentagrams found in the labyrinth. Accessing a new pentagram allows Werdna to summon stronger monsters and restore his health and spellcasting powers. Werdna will have to fight a variety of monsters and guardians, but many of the randomly appearing enemies in the game are parties of adventurers not unlike those who were controlled by the player in the previous three games. In addition, Werdna is being chased by the rather ticked-off ghost of his old enemy Trebor. The game features a somewhat tweaked version of the same engine and graphics used in the earlier installments of the series. The difficulty level has been increased due to the lack of an experience points system, which often leaves the player-controlled party underpowered. The labyrinth contains abundant traps and complex mazes. For obvious reasons it is no longer possible to import characters from the previous games. The game features three different endings: a good ending, an evil ending, and a special Grandmaster ending which is often considered to be the single most difficult task to achieve in the entire series.