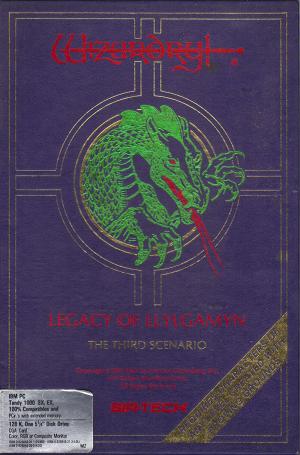 A generation has passed since your band of adventurers reclaimed the Staff of Gnilda and the armor of the Knight of Diamonds, and the land has been at peace. But now nature itself seems to be attacking the land of Llylgamyn, as earthquakes and tidal waves ravage the land. The Sages believe the Orb of Scrying is the city's salvation, but it is guarded by the dragon L'kbreth. A band of explorers must once again venture forth in search of the Orb. Legacy of Llylgamyn is the third entry in the Wizardry series. Like its predecessors, it is a first-person dungeon-crawling role-playing game in which the player assembles a party of up to six characters and explores a large maze-like dungeon, fighting randomly appearing enemies in turn-based combat and occasionally returning to the game's only town to rest, buy supplies, and outfit the characters. Characters must be imported from either the first or the second game. Character classes, combat system, and overall gameplay mechanics are very similar to those of the two previous games. Good, evil and neutral alignment, however, plays a larger role. While the first level of the dungeon is accessible to everyone, the other five levels impose alignment restrictions, requiring the party either to have at least one good or bad character, or contain no neutral characters.