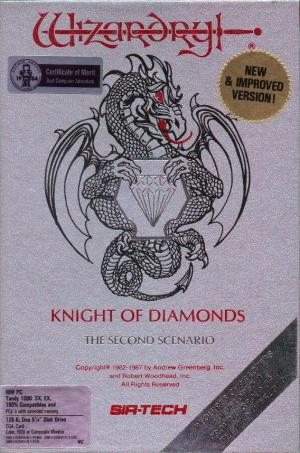 Wizardry: Knight of Diamonds is the sequel to Wizardry: Proving Grounds of the Mad Overlord. It is an early example of an expansion pack, requiring the player to have the original Wizardry installed to play. It uses the same engine and spells, but is scaled for importing existing characters rather than creating a new party. Players explore a 3D wire frame maze searching for a key item, the Staff of Gnilda, required to complete the game. The player creates a party of up to 6 characters of various classes, and then gain experience points by fighting random encounters. The maze has many hidden doors and secrets, so the player is encouraged to map out each floor on graph paper to find their way. The story takes place after the events of the first game. The mad king Trebor has committed suicide after becoming obsessed with the amulet and fearing the return of Werdna. With both Trebor and Werdna dead all seemed well within the kingdom of Llylgamyn. Unfortunately, this peace didn't last very long. With Werdna dead and out of the limelight, an evil knight named Davalpus felt it was time to make his move. He stormed the castle, slaughtered the royal family, and declared himself supreme dictator for life. The Prince of the land fought and killed Davalpus using the legendary Staff of Gnilda and wearing the armor of the Knight of Diamonds. However, the god Gnilda took the staff back and placed it deep within his heavily guarded six-level temple. Since the staff's power protects the land from invasion by hostile outlanders, someone will need to venture into the temple and get the staff back along with Gnilda's blessing. Though Knight of Diamonds is the second scenario in the series, it was the third game in the series released for Famicom/NES. The NES version was redesigned to be played by new parties and the maps were re-designed to be non-linear. This makes the NES version more like a unique entry in the series rather than a port of the computer versions. The Famicom version is compatible with the ASCII TurboFile, an accessory that allowed the player to transfer characters between the Famicom Wizardry games. This feature was removed from the NES version. The Famicom version also allowed the player to switch between English and Japanese text.