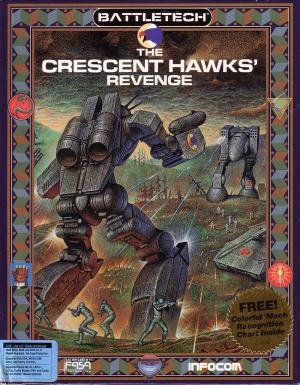 BattleTech: The Crescent Hawks' Revenge is the sequel to BattleTech: The Crescent Hawk's Inception. It is the year 3029 during the Succession Wars; as the nineteen-year-old Mechwarrior Jason Youngblood of the Lyran Commonwealth (House Steiner), it is time to strike back at the treacherous forces of the Draconis Combine (House Kurita), who captured Jason's father in the original BattleTech, and whom he has sworn to rescue. Unlike its predecessor, the game inclines more towards RTS (real-time strategy) than role-playing gameplay style. The player will lead the forces of 31st Century BattleMechs (Warrior Robots) in a daring mission of rescue and revenge. The game consists of two parts - the storyline, which gives the player guidance and direction, and changes with the outcome of every decision made; and the scenarios, which are the arenas where the player watches his/her maneuvers unfold in real time. The game has digital speech and a technically advanced musical score.