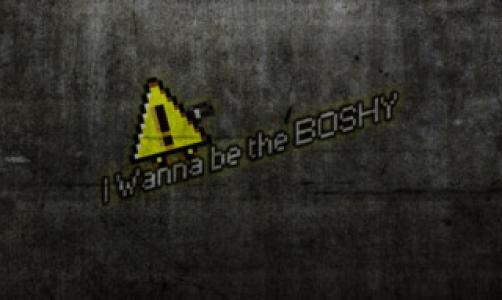 I Wanna Be The Boshy

Inspired by I Wanna Be The Guy, I Wanna Be The Boshy is a "trapformer" in which a single player controls a yellow warning sign toting a pistol, whose goal is to become the "Boshy". To get there, our intrepid hero must survive an array of deadly platforming levels, where one mistake could mean death. In fact, practically every room in the game is chock-full of dodging and jumping, as well as harmless objects suddenly becoming a death trap, randomly generated events, and even a few jump-scares. As the game progresses, the player can find special treasures which unlock new features, like secret items, CD's, and new characters. Two players can also play online, with one player able to warp to the other's location if that person is further ahead.