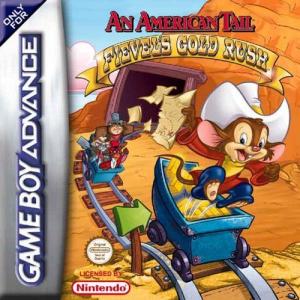 Fievel Mousekewitz, a rodent with an immigration card, is heading west in An American Tail: Fievel's Gold Rush. Based on the animated series from Universal Studios, the game has players controlling Fievel as he travels through 18 levels and six worlds, including "New York City" and "Gold Dust Gulch," to piece together Cat Malone's treasure map. Fievel will swing on rope, attack with his ten-gallon hat, ride riverboats, and jump the train to find Wylie Burp's gold.