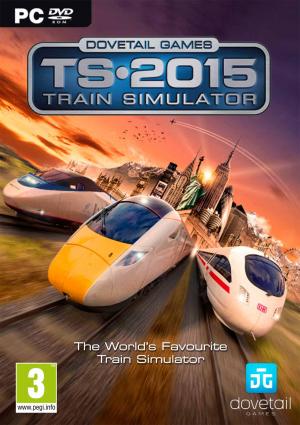 Train Simulator (originally RailWorks) is a train simulation game developed by Dovetail Games, formerly known as RailSimulator.com.[1] It is the official successor to Rail Simulator, and was released online on 12 June 2009 and in stores on 3 July 2009.[2] Compared to Rail Simulator, RailWorks contained new rolling stock, tools that previously had to be downloaded separately, graphical advancements such as modification of the existing content, bug fixes, backwards compatibility and the ability to trade elements from the virtual world with other users online. The first release of RailWorks contained all of the five real-world routes of the original European and North American releases of Rail Simulator, and added three new fictional routes: a large UK goods yard, a route set in the Alpine region and a route based around Denver, Colorado.[3] It is a Steamworks title, which means it uses and requires Steam to activate and to deliver core game updates. Steam is also used to deliver additional routes and locomotives in the form of DLC. The core game has received several free updates since release, including major new versions RailWorks 2: Train Simulator in 2010, RailWorks 3: Train Simulator 2012 in 2011, Train Simulator 2013 in 2012, Train Simulator 2014 in 2013, Train Simulator 2015 in 2014 and Train Simulator 2016 in 2015.