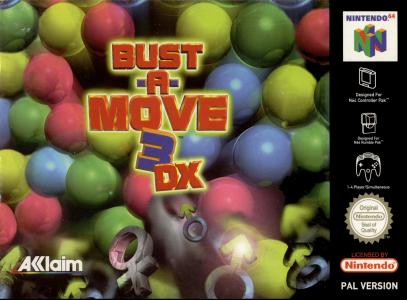 So you think you've mastered every puzzle game in the universe, eh? Well, think again. Our all-new Bust-a-Move 3 will have you eating humble pie 'til your gut hurts. But hang in there, after your ego recovers a bit, you'll learn to smash through all the complex levels of dazzling rainbow spheres. And when you figure out what it takes to win, challenge friends to a head-to-head and watch them squirm. Just try not to laugh too hard. Puzzle Bobble 3 (also known as Bust-A-Move 3) is the second sequel to Puzzle Bobble. It was released into arcades in 1996 and later ported to the PlayStation, Sega Saturn, Nintendo 64 and PC. It would be the final appearance of Puzzle Bobble on the Sega Saturn. Like its predecessors, the player is tasked with shooting balls at groups of balls, creating groups of 3 or more, which are then removed from play. A North American remake is entitled Bust-a-Move '99.