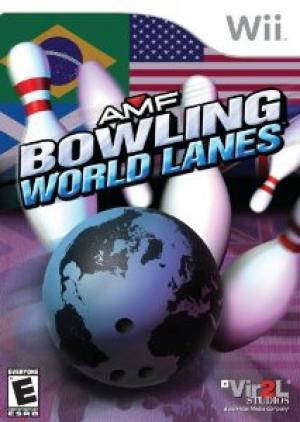 AMF Bowling World Lanes is a sports video game developed by Front Line Studios and published by Bethesda Softworks on November 18, 2008 for the Wii video game console. It is the second AMF Bowling game on the Wii after AMF Bowling Pinbusters! Gameplay In AMF Bowling World Lanes, the player uses the Wii Remote to bowl bowling balls in games played against the AI. When preparing to bowl a ball, the player can choose to throw the ball several seconds after their character has walked up to the line during their approach. The game comes with several characters that players can use and locations where players can bowl. There is also a guy called George with a long beard who you can play as only after bowling 3 perfect games. Characters include a Scottish person that wears a kilt who bowls with his plaid ball, and a Brazilian soccer player who bowls with a black and white ball. AMF Bowling World Lanes also contains several bowling mini-games.