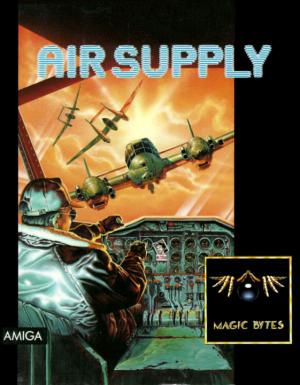 Air Supply is a vertically scrolling shooter. Besides shooting enemies (mostly small but numerous), the player has to drop supply units on especially marked places. However, the number of carried packages is limited and therefore the aircraft has to land on airports to stock up on them; it is also possible to turn in order to reach missed spots. After those duties are carried out, the player proceeds with destroying the enemy's fort, playing a horizontally scrolling bonus level and starting the next of overall ten stages. Flying around constantly drains fuel which can be filled by picking up extra fuel left behind by dead enemies. They also drop other upgrades like smart bombs or protective shields.