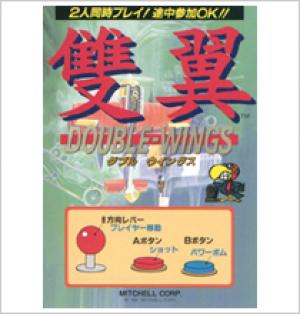 Double-Wings is a 2D up-scrolling shoot 'em up game where you take control of one of the biplane pilots Nick Nolmarse, Sophie Dior or Elan Auckbetz each with their own weapon patrons. When fully upgraded Nicks plane shoots in an arc, Sophies plane shoots strait blue bullets and Elans plane shoots straight and sideways. As you make progress and fight of helicopters, airships, various planes, tanks, ships, static guns and bosses power-ups come available. Power-ups cans can be collected from destroyed enemies and increase your firepower. There are a limited number of super bombs available that do a vast amount of damage. The game can be played solo or with a friend.