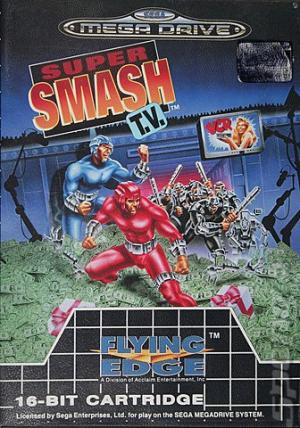 Smash TV, known as Super Smash TV on some other versions, is a 1990 arcade game created by Eugene Jarvis and Mark Turmell for Williams.[1] It is a run and gun game in the same vein as its predecessor, Robotron: 2084 (also produced by Jarvis). As in the previous game, players battle waves of enemies by using guns; the arcade version even uses the two-joystick control system of Robotron. The plot of Smash TV revolves around a futuristic game show in which players compete for various prizes as well as their lives. Home versions were developed for various platforms, most of which were published by Acclaim Entertainment.