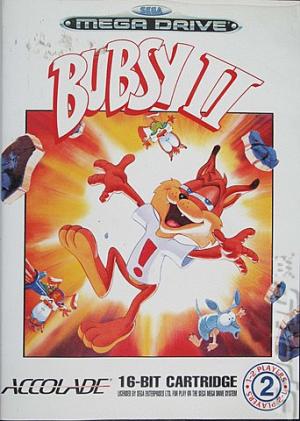 Bubsy 2 is a platform video game, the sequel to Bubsy in Claws Encounters of the Furred Kind, and the second game in the Bubsy series.[4] It was released in 1994 for the Sega Genesis, Super Nintendo, and Game Boy. In his second platformer, Bubsy the Bobcat must explore a mysterious museum filled with portals leading to different worlds! What could possibly go wrong? Overview: Bubsy II is a 2D platformer developed and published by Accolade for the Super Nintendo Entertainment System and Sega Genesis in 1994. The sequel to Bubsy: Claws Encounters of the Furred Kind, Bubsy II puts players back in the role of Bubsy, the wise-cracking anthropomorphic bobcat, as he sets off through the Amazatorium (a museum full of portals to different worlds) to defeat the tyrannical anthropomorphic pig leader, Oinkton P. Hamm. Unlike the previous game, Bubsy can enter any of the six worlds he wants to at any time (with the exception of the last world, which must be unlocked by completing the other five). He also now has a health system (in which he can take up to three hits from normal enemies before he dies, unless he finds a special healing item) and multiple gadgets that can be purchased by collecting trading cards (such as a "smart bomb", a diving suit, a cartoonish black hole to hide in, and ammo for his toy weapon). Score-giving yarnballs are now replaced with marbles, and the "Woolies" are replaced with various baddies.