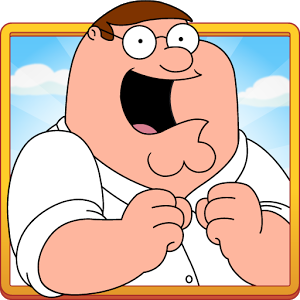 Family Guy The Quest for Stuff

Family Guy: The Quest for Stuff is a freemium video game for iOS, Android, Windows Phone 8 and Windows 8.1 based on the American animated series Family Guy released by Fox Digital Entertainment and developer TinyCo. It allows users to create and run their own version of Quahog using familiar characters and buildings. It features an original story conceived by the show's writers in which Quahog has been destroyed and it's up to the player to bring it back to its former glory. Some of the show's main actors, like Seth MacFarlane (Peter, Stewie, Brian), Alex Borstein (Lois), Mila Kunis (Meg), and Seth Green (Chris) collaborated with TinyCo for the project.