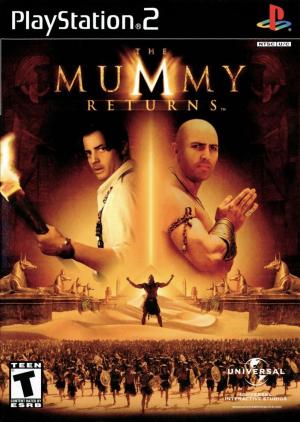 The Mummy Returns is a 3rd person action adventure game where you can play as two different characters each with different moves and abilities. Follow along with the action of the movie as you play as Rich O'Connell in an effort save your son, Alex. Pickup both guns and handheld weapons to defeat the armies of ancient Egyptian evil and defeat the mummy and ultimately, the scorpion king. But when you finish there, the adventure isn't over. Play as the mummy, Imhotep, as you try to gain the power of the scorpion king to rule the world. Use your might and powerful magic to defeat the challenges before you, even suck the souls of your dieing enemies to regain health. Likenesses of the movie's actors guide you through the story as you either try to stop the mummy or play as him to rule the world.