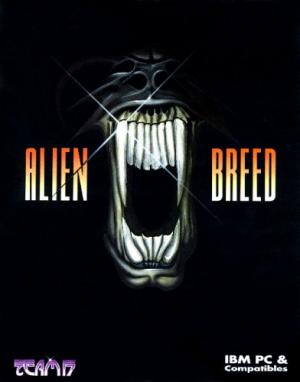 Alien Breed is a top-down science fiction shooter somewhat inspired by the movie Alien in terms of plot and atmosphere. Gameplay, though, was obviously inspired by the Atari arcade classic Gauntlet. The game tells a typical sci-fi story of an alien invasion on the space station ISRC-4. Two space marines, Johnson and Stone, are the only human beings left to clear the base of aliens. Moving around an alien-infested complex in a top-down view, you must at all times keep an eye not only on your energy level, but also be conservative with ammunition. Though you will find new ammo cartridges strewn around the levels, they are consumed quickly by respawning aliens that may come crawling out of the floors and walls when you least expect it. On the floors, you will also find keys for passing through locked doors. Keys must also be used with care, or you may find yourself locked out of a room containing the remaining keys that you will need in order to complete the level. Other doors are one-way, and will electrocute you if you try to pass it in the other direction.