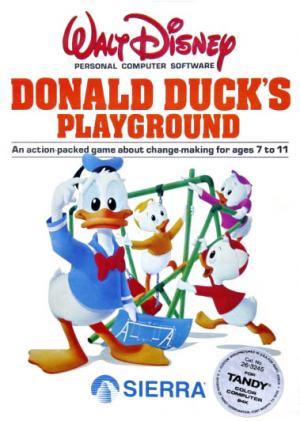 Donald Duck's Playground is a 1984 Sierra educational game. The player takes the role of Donald Duck, whose job is to earn money so that he can buy playground items for his nephews. To do this, Donald can get himself a job in any of four different work places. Each job shift lasts from one to eight minutes, as the player wants, in which time Donald has to earn as much as he can. Donald Duck's Playground was originally written for the Commodore 64 and subsequently ported to Sierra's AGI interpreter for the Apple II, PC compatibles, Amiga, and Atari ST. A version for the TRS-80 Color Computer followed as well. The AGI engine had not been designed for this type of game and Al Lowe has described some aspects of porting it (most notably the cash register section) as "ridiculous".