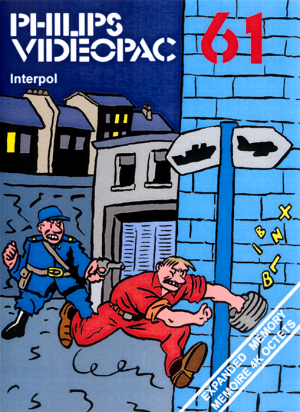 Interpol is a game for two players, one controls two spies (red characters) and the other controls two police officers (blue characters). The spies are in possession of secret information and must try to leave the country with them, by air or by sea. The police officers have to stop their plan. The airport and the port are blocked by the police, and individuals interested in traveling must present a code which only the police knows. The main screen represents a town, with U-shaped boxes with numbers from one to nine inside representing buildings. At the beginning of the game, the player controlling the police must define the code which blocks the airport and port (represented by an airplane and a ship). The code must be a word of five letters. As the player enters each letter, he or she must assign a building to store that letter, by entering its number. Once all letters are stored, the game begins. The player controlling the spies must choose one of them and start moving around the town searching for the letters. While moving, the selected spy becomes invisible so the police officer won't see which way the spy takes. At one turn, movement can only be vertical or horizontal, so if the player chooses to move horizontally, he or she will only be able to move vertically in the next turn. At the bottom of the screen, a red character will be shown walking and little green bars will pass him by, telling how many "spaces" he has moved. Each turn may last five to 60 seconds, depending on the choice the players made at the beginning of the game (different durations can be set for each player). The turn ends when the time is over or when the player presses a button. The player controlling the police officers chooses one of them and starts moving, trying to catch the spies. When the player thinks the police character is in the same space the spy is, he or she must press the action button. If the spy is really there, he is captured, if not, the player controlling the police officers just ends his or her turn. The game ends when the police captures both spies or when one of the spies gets to the airport or the port and enters the correct word.