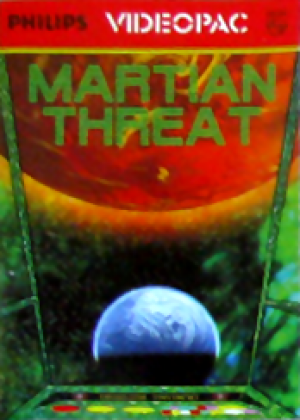 Martians are attacking the Earth and planning to destroy all life in it. A Martian space ship is orbiting the earth and a big laser cannon is being built on Earth and it is the player's mission to hold the Martian threat until the laser cannon is complete. To do so, the SIDO (Space Intruder Defense Organisation) infiltrated a fighting probe inside the Martian spaceship. In Martian Threat the player controls a fighting probe with the joystick. The lack of gravity will make the probe keep moving until reverse thrust is given. The player has to shoot Martians and their energy bombs, which will appear in four different spots. The probe can only shoot diagonally. At the start, the Martian bombs are green and have little energy on them. As the game proceeds the bombs turn blue, purple and finally red. The probe can take up to ten hits from green bombs, but only three hits from red bombs. Additionally, the bombs will move faster and when they hit the probe they'll push it away. The probe explodes if it hits the space ship's walls. The game has two possible endings. If the player succeeds in defending the Earth for 64 seconds (77 seconds in PAL systems), the laser defense will be finished and Earth will be saved. If the probe gets destroyed before that, the Martians will release their virus bomb and destroy all life on Earth.