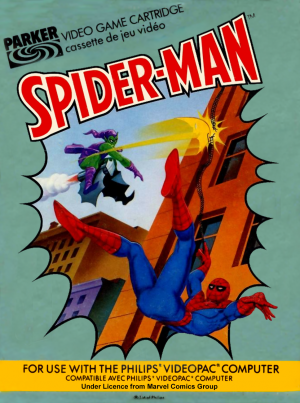 The discovery of this prototype was first reported by the Brazilian site, Odyssey Mania (then Odyssey 2000), in December 2003. The prototype, which is on EPROMs, is currently owned by a Dutch collector, Bas Kornalijnslijper. Parker Brothers licensed the Spider-Man character from Marvel Comics Group in or around 1982 and immediately set out to create video games around him. While the company did manage to release Spider-Man for the Atari 2600, the Philips G7000 version never made it to market. Screenshots show that the G7000 prototype looks quite similar to the Atari 2600 release. In that game, Spider-Man must avoid hazards while climbing up the front of a yellow skyscraper on his way to a final confrontation with the Green Goblin. The G7000 game also contains an intermission screen.