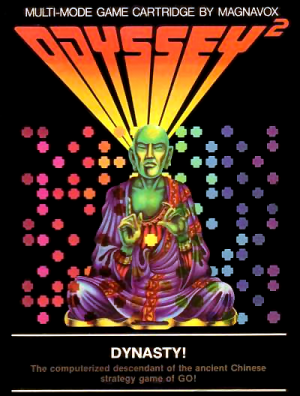 Press 0 on the alpha-numeric keyboard if you are playing on color TV. Press 2 if you are playing on Black and White TV. The game is played on an 8 x 8 matrix. Four "armies" in two different colors are at the center. A flashing question mark at the right hand side of the screen is asking if the "armies" of that color are to be played by a person or the computer. Press "yes" on the alpha-numeric keyboard for person. Press "no" for computer. If you have entered "yes," a second symbol will appear followed by a flashing question mark. If you wish that color played by a person, press "yes." If you want to play against the computer, press "no." If you have elected to play against the computer, the symbol for microprocessor will appear on the screen. If you are playing against another person, individual timers will appear separately at the top of the screen. Player one's timer will appear first. You can enter up to 99 minutes of time for each player in the game. Different times may be entered for each player to give a novice more of a chance against an experienced player. If you want to play with no time limit, enter 00 on the numeric section of the keyboard. If you are playing against the computer, the microprocessor will make its move instantly. It can make more than 100,000 electronic decisions per second. The object of the game is to occupy as much of the matrix as possible. The game begins with two "armies" of each color at the center of the matrix. The game ends when the board is filled or when neither player can enter a move and capture and opposing "army." The player with the most "armies" on the matrix is the winner. A running score appears at the top of the screen throughout the game. Every entry must satisfy two conditions: - An "army" must always be placed next to an opponents "army." - One or more of the opposing "armies" must be trapped by the newly entered "army" and another "army" of the same color. The trapped "armies" will automatically change to the conqueror's color. If these condition cannot be met, there will be an audio signal and the player loses a turn. Use the joy stick of the hand control to position the box on the screen where you want to locate an "army." Press the action button to enter the "army" onto the screen. Player one uses the left hand control. Player two uses the right hand control. Players may capture more than one army in different directions on the same move. The directions may be in any horizontal, vertical or diagonal straight line. Secret strategy hints. - The corners are the most important strategic positions. Once an "army" occupies a corner, it controls three directions. An "army" commanding a corner position cannot be captured because it cannot be surrounded on two sides in a straight line. - The outside positions of the matrix are very important because they effect five directions but are only vulnerable from two sides. - Caution! Be careful before occupying the first rows inside the perimeter of the matrix. They are jumping off points to the outside and corner positions. VERSION II: DIRECTIONAL DYNASTY Press 1 on the alpha-numeric keyboard if you are playing on color TV. Press 3 on the alpha-numeric keyboard if you are playing on Black and White TV. Enter player information and timer settings as per Dynasty rules 4 through 9. Directional Dynasty differs from Dynasty in only one way, but it changes the game completely. Players cannot capture "armies" in more than one direction on the same move. You must make a choice. When you enter an "army" into a position offering an option to capture "armies" in more than one direction, the surrounded "armies" will not change color automatically. Push the joy stick on the hand control towards the "army" or "armies" you wish to capture. A second positioning box will appear in that row. Press the action button and the surrounded "armies" in that row will change color automatically. It is very important to consider strategic position as well as the number of "armies" open to capture when exercising a directional option.