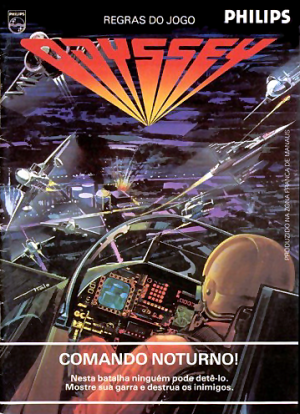 Comando Noturno! (English translation: "Night Commando!") was one of the final games released in Brazil, and one the most unusual, because it was never released anywhere else! Recent discoveries have revealed that the game was planned for release in Europe, where it would have been named "Nightfighter," but ultimately it never appeared outside of Brazil. Comando Noturno! is the only flight simulator available for the Odyssey², and is notably more complex than most other Odyssey² games. It's rare and quite valuable.