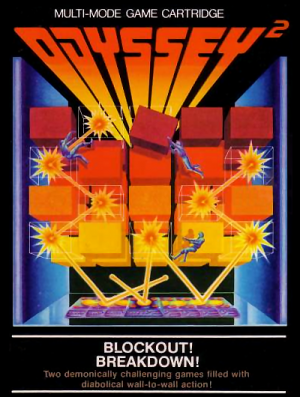 BLOCKOUT! (One or two players) Press 0 (zero) on the alpha-numeric keyboard. BLOCKOUT and BREAKDOWN will be alternately displayed on your TV screen. Press 1 to play BLOCKOUT. The object of the game is to blast through the blocks in the barricade in the shortest amount of time. The scoreboard at the top of the screen signals the function of the two hand controls. One hand control will activate the Power Bar. The other hand control will activate the demons. The roles of the hand controls will automatically reverse after each game. The can play against another player or against the computer. Signal the computer you are in the game by moving the joystick of your hand control. If the computer does not receive a signal from one of the hand controls, it will take over its function and play against you. If the computer does not receive a signal from either hand control, it will play itself. The Power Bar is moved left and right by pushing the joystick in the desired direction. The longer the bar is moved in one direction, the faster it will travel until it achieves maximum speed. The player controlling the Power Bar presses the action button to bring a Blockbuster into play. The Blockbuster will always come in from a random direction. When the Blockbuster hits the Power Bar, it will rebound into the fourth dimensional barricade. Each time the Blockbuster hits the barricade, a block in the barricade will disintegrate. The best breakthrough time for each player will be indicated on the scoreboard at the top of the screen. A digital timer is between the player's score indicators. Each player has 90 seconds to try and break through. If the Blockbuster hits the left side of the Power Bar, it will rebound to the left side of the screen. If it hits the right side, it will rebound to the right. The rebound angle will be twice as steep from the center half of the Power Bar than from a hit on the outer edges. The Blockbuster's speed and trajectory will increase as it cuts through each successive wall of the barricade. If you miss hitting the Blockbuster with the Power Bar, press the action button on the hand control to bring a new Blockbuster to the screen. You have an unlimited number of Blockbusters available during the 90 second duration of the game - but you cannot have more than one Blockbuster on the screen at a time. Each Blockbuster will come on-screen from a random direction. The electronic demons are moved left or right by moving the joystick of the hand control in the desired direction. Only one demon may be moved at a time. The particular demon in motion is determined by the vertical position of the joystick and the action button. To move the demon in the lowest row, pull you joystick towards you. Leave the joystick in the middle (neutral) position to move the demon in the second row. Push the joystick away from you to move the demon in the third row from the bottom. Push the action button to move the demon in the top row. The demons have the power to replace disintegrated blocks and rebuild the barricades. They have two power sources - one on each side of the screen. When a demon touches one of its power sources, it will start flashing and will replace a block when it is moved to the missing block's position. The demon will then stop flashing and must be recharged at a power source. An uncharged demon will fall off-screen if he tries to cross a gap in the wall or has a block disintegrated from under him. He will reappear automatically after a penalty delay. The winner is the player who breaks through the barricade in the shortest time over a pre-determined number of games. The games will reset automatically after each 90 second period. BREAKDOWN! (One or two players) Press RESET on the alpha-numeric keyboard. Press 0 (zero) - then press 2. The object of the game is to destroy as many of the blocks on the screen as you can within 60 seconds. The control of the Power Bar is the same as in BLOCKOUT but the speed of the Blockbuster and its trajectory are not affected by the blocks in the barricade. The control of the demons is the same as in BLOCKOUT - but they will move twice as fast (which is something to watch) as in BLOCKOUT. You can play against another player or the computer by signaling the computer with the hand controls as in BLOCKOUT. The digital scoreboard contains the timer, the number of blocks left on the screen and the lowest scores in the game series for each of the players. The game will reset automatically after each sixty-second period. The winner is the player who leaves the fewest number of blocks on the screen after a predetermined series of games.