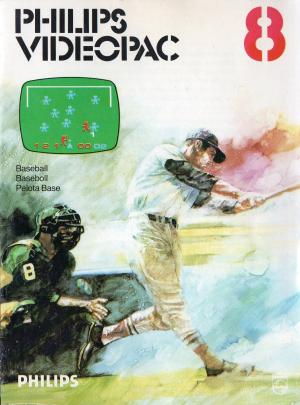 Press 1 on the alpha-numeric keyboard. The scoreboard flanks either side of home plate. (lower left numbers indicate Balls, Strikes, and Outs - in that order) The digital readout scoring indicators are color coded to the teams. The player using the right hand control is always first at bat. The player using the left hand control is always first in the field. Players should trade hand controls to alternate being first at bat in series games. THE OUTFIELD is positioned by manipulating the joy stick on the hand control activating the fielders. THE PITCH is thrown by pressing the action button on the FIELDER hand control. Inside and outside curves may be thrown by maneuvering the joy stick. The OUTFIELD will not be affected by the joy stick during the pitch. If the batter does not hit the ball, the catcher will automatically throw it back to the pitcher. The computerized umpire calls balls and strikes. Four ball and it's a walk to first base. Three strikes and you're out! THE BATTER is controlled by the action button on the BATTER hand control. A ball hit early will go to left field. A ball hit late will go to right field. The distance a hit travels will always vary. A ball hit out of the park (white line at top of screen) is a home run. The batter will automatically run the bases. A ball caught on the fly is an automatic out and the ball is returned automatically to the pitcher. If the fielders do no catch the ball on the fly, the joy stick on the FIELDER hand control is used to get one of the outfielders to the ball. The throw is made by positioning the joy stick to the base desired and pressing the action button. A hit not caught on the fly will automatically send the batter running to first base. He can go for extra bases by pushing the joy stick in any direction on the BATTER hand control. Note: Base runners cannot reverse their direction. The computerized umpire makes all the calls. SACRIFICE FLY. A man on base can try for extra bases after a fly ball is caught by pushing the BATTER joy stick. Players can go for extra bases any time before the ball is returned to the pitcher. The ball is returned to the pitcher only after both hand controls are inactive for two seconds. After three outs, the batting team and fielding team will automatically change positions. The team with the highest score after nine innings wins. The game will go into extra innings in case of ties! The end of the game is signaled by F (Final score) replacing the inning indicator on the scoreboard. To play again, press the RESET key on the alpha-numeric keyboard and then press 1.