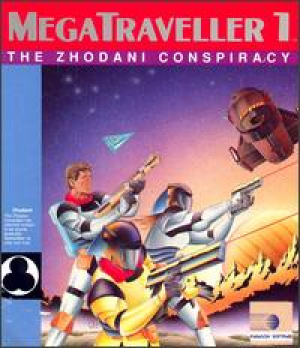 The game takes place within the fictional universe in which prior Traveller releases are also set. The most significant power in this universe is the human-dominated Imperium which predominates across thousands of inhabited solar systems. Bordering the regions controlled by the Imperium are other interstellar powers including the Zhodani Consulate. The Imperium and the Zhodani have a long history of tense relations and, as the game begins, rumors of another frontier war are circulating. Against this backdrop, a security agent working for Sharushid, a large corporation active throughout the Imperium, discovers that a company sub-sector chief named Konrad Kiefer is secretly aiding the Zhodani by smuggling arms across the border into the hands of dissidents in preparation for an uprising within the Imperium to be coordinated with a Zhodani attack. This security agent encounters five experienced adventurers in a bar on the planet Efate and entrusts them with evidence of Kiefer's treachery.[14][15] These adventurers are tasked with delivering the evidence to a second Sharushid agent located in another solar system and ultimately with stopping Kiefer and his conspiracy against the Imperium.[3][1] The player assumes control over the party just after the security agent entrusts it with the evidence against Kiefer. The game includes numerous subplots which largely serve as means for the player to earn money. For example, the player can choose to locate and retrieve a stolen icon on behalf of a religious leader in exchange for a reward. Other methods to earn money include stripping the corpses of slain opponents for marketable items, killing wanted criminals to earn a reward, and attacking other vessels in space to pirate their cargo. Gameplay in the early stages of the game primarily involves activities of this nature so that the player can accumulate enough money to outfit the party with better weapons and armor and purchase a jump drive capable of propelling the party's spacecraft to other worlds crucial to obtaining the means to stop Kiefer.[9] Events in this game transpire just prior to the Fifth Frontier War between the Imperium and the Zhodani, which marks the line of demarcation between earlier tabletop role-playing products released by Game Designers Workshop under the name Traveller and later products set after the war released under the name MegaTraveller.[14] This game is the only MegaTraveller product authorized by Game Designers Workshop where events occur prior to this conflict.