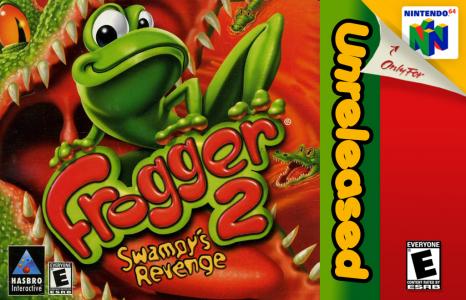 UNRELEASED Frogger 2: Swampy's Revenge is a video game released in 2000. The game is part of the Frogger series, and the sequel to the 1997 remake of Frogger, featuring similar 4-way movement gameplay in a 3D world and 6 different environments. Unlike its predecessor, Frogger 2 featured a choice of different characters to play with in the game, several multiplayer modes, and an in-game storyline. A Nintendo 64 port of the game was planned, but it was cancelled. The sequel to the Original classic (and the so-so 1997 release) changes the way you look at frogs! The stage is set for a totally new adventure where Frogger and his female friend Lillie Frog will need to leap over, dive under, hop through and climb above endless new obstacles and challenges to save the Frog Babies from Frogger's new arch enemy, the dastardly Swampy the Crocodile.