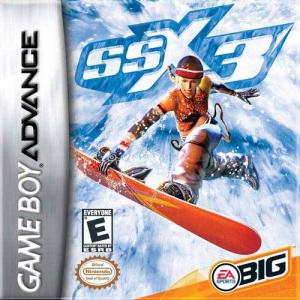 EA Sports returns to the slopes and the insanely fast-paced action of snowboarding with SSX 3 for the GBA. Combining racing with tricks, the game allows players to choose from different events and challenges as they desire. The story mode of SSX 3 involves, like the previous entries in the series, becoming the best snowboarder in the world. Players have a cast of characters to select from, most of whom have appeared in previous SSX games. Once players have selected their character, they're off to the slopes to start winning races and performing huge tricks. The main mode has 12 different events players can participate in. Players select the event they want to compete in from the map. There are races, super pipe, big air, and other events, and there's something for everyone. Winning these events nets the player cash which can be used to upgrade their equipment. In addition to winning the race, players want to look good doing it, and that's where the tricks come in. Pull off enough of them, and the player's boost meter fills, rewarding them with some extra power. Complete enough tricks and the character learns new, even more dangerous and impressive tricks. Gamers who love snowboarding will enjoy SSX 3. While players can't explore as freely as they can in the console version of the game, the racing is still intense, and the many different game play options keep the game from getting boring or repetitive.