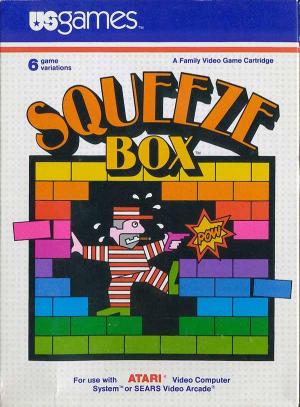 Squeeze Box is a single player, full color game designed to be played on the Atari Video Computer System or the Sears Video Arcade. There are six game variations to test your skill and judgment. Squeeze Box is the ultimate escape game. Our pistol packin' jailbird has got to shoot like crazy to knock out an escape route through the walls... before they close in on him. The longer it takes, the faster they come, so aim carefully. But don't rush out too fast because the next room is worse, and you're getting points for each block you shoot out. Test your endurance! Wait too long and you might touch the wall. Three touches and its all over - except for the hottest finish you have ever encountered in a video game.