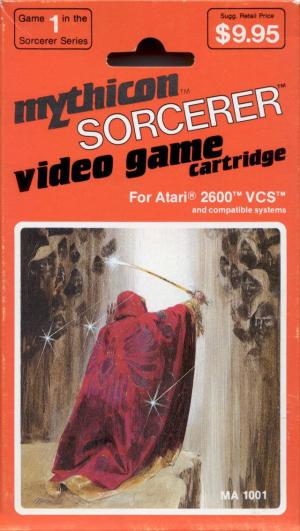 Many centuries ago, the Earth was ruled by Sorcerers and Wizards. They possessed mystical powers capable of both good and evil. The most respected influences in the land were from the good Sorcerers. This fact continually disturbed the evil Wizards, and they eventually decided to use their power to conquer the countryside and enslave its people. They devised a plan to systematically eliminate the good Sorcerers by sending wave after wave of diabolical creatures to ravage the world. As the bravest of the good Sorcerers you have been asked to destroy these forces and save the planet. As a reward for your bravery: whenever you overcome or destroy a creature, you will receive a treasure. Knowing your bravery the Wizards have done everything within their power to keep you from succeeding. They don't believe you will survive their first three waves of evil, but just in case you do they have several surprises waiting, Only you can discover through bravery and talent how evil they can become. To give you more power over the Forces of Evil the good Sorcerers have provided a magical Flying Platform. When you start on your journey you should first catch this elusive platform. You can continue without it, but only the foolish would dare to do so. Once on the Flying Platform you can go anywhere on the screen to avoid or destroy the enemy. The good Sorcerers have also given you four lives to use against the Forces of Evil.