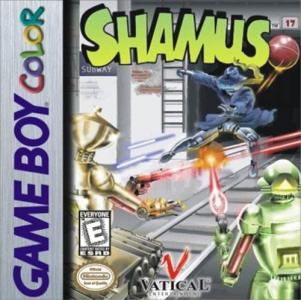 Shamus has tracked Shadow to his lair. Preparing for a long fight, Shamus charges his blaster and gets a reading from his sensors, telling him that there are 128 rooms to explore before he gets to Shadow. Take control of Shamus as you hunt down Shadow and try to put an end to his diabolical deeds. Unfortunately, there are droids and drones that will do whatever they can to stop you. You'll come across a total of seven different androids with different abilities and skills. Luckily, you can fire your blaster in eight different directions to eliminate the bad guys while avoiding enemy fire. During the adventure, you will find keys to unlock new levels, extra lives, and mysterious question marks that contain extra lives, points, or Shadow himself. If you are good enough, you will be able to unlock several bonus levels. Work your way through the hideout to a final battle with Shadow in SHAMUS.