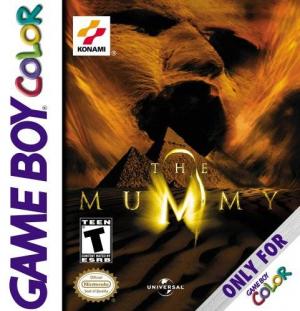 Rick O'Connell accidentally discovers Hamanaptra, the Egyptian city of the dead. When he returns with Egyptologist Evelyn Carnahan and her brother Jonathan they awaken Imhotep, a priest that was cursed and mummified alive. Now, Rick and his companions must stop Imhotep from destroying the world. In each of the levels, you (as Rick) must gather the six pieces of the star key. However, there are a large number of enemies that will get in the way. Luckily, you can use a huge number of weapons including a machete, dual pistols, a shotgun, a Lewis machine gun, dynamite, and magical amulets to get rid of any enemy. In addition to the exploration and action levels, some areas incorporate new gameplay styles like floating down a river while avoiding obstacles. The fate of the world is in your hands in THE MUMMY.