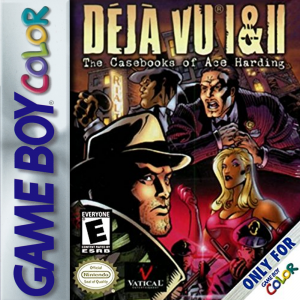 Deja Vu I & II: The Casebooks of Ace Harding

Take on two thrilling mysteries in one Game Pak! Life is never boring when you assume the role of Ace Harding, private detective. In Deja Vu I, you will scramble down the dark alleys of Chicago, searching for a cure for you amnesia and a killer who has framed you for a brutal murder. After solving the first case, you'll uncover a few loose strings that gradually unrabel into Deja Vu II. Trapped in the slimy town of Last Vegas, you find yourself dealing with a notorious mob leader who makes you an offer you can't refuse. -Two detailed graphic adventure games in one Game Boy Color Game Pak! -Detailed commands for interacting with anyone or anything! -Return to the scene of the crime, or any of the other 140 locations! -Sort out the real evidence from the red herrings and over 80 other items! -Battery-backed save option for up to three save game files!