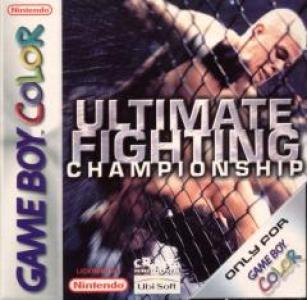 In Ultimate Fighting, anything goes. From disciplined martial arts techniques to freestyle wrestling, every form of fighting is represented. Now, Ultimate Fighting makes it way to the Game Boy Color with ULTIMATE FIGHTING CHAMPIONSHIP. You can choose from eight different fighters, each with different fighting styles and abilities. Once in the ring, you have full control over your fighter's movement. Oncoming attackers can be easily avoided by moving up or down, which gives the game a pseudo-3D feel. Get used to the controls and learn how to utilized a fighter's strengths and weaknesses in the Training mode. When you are ready for a challenge, fight a Single Match in the Versus mode, become world champion in the Tournament mode, or try to beat as many fighters as you can before being knocked out in the Survival mode. Play ULTIMATE FIGHTING CHAMPIONSHIP, and try to keep you teeth.