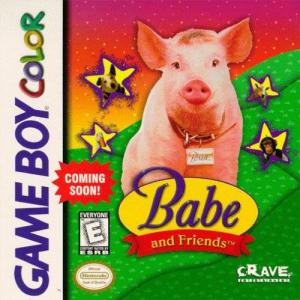 Puzzle fans that enjoyed the BABE movie series will find a lot to like here. BABE AND FRIENDS, a single-player puzzle game for Game Boy Color, has the little porcine hero guiding his herd through 40 levels that span such locations as the farm, the airport, and the city. In each level there is a checkered flag, to which Babe must take a herd. The sheep aren't very good at finding their own paths, so Babe has to walk them through every step of the way. Clear obstacles, set up roadblocks to make detours, and generally do what you have to in order to make a safe route for the sheep. Watch out for obstructions such as carts in the airport and rushing rivers on the farm. Detailed still-screens of all of Babe's friends appear between the levels to move the story along. A password save system is included if you need to take a break from the brain-bending action. Can Babe save the day once again?