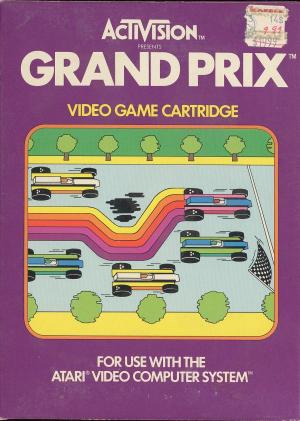 Grand Prix is a Formula One Grand Prix motor racing-themed video game, and one of the first side-scrolling racing video games. It was designed and programmed by David Crane for the Atari 2600 video game console, and published by Activision in 1982. Grand Prix was the first Atari 2600 game to feature shaded objects in color. When David Crane developed an Atari 2600 programming technique for painting large, multicolored sprites on the screen, he made a color pattern that reminded him of Grand Prix racing stripes. This inspired him to design a Grand Prix racing game to apply his new technique.