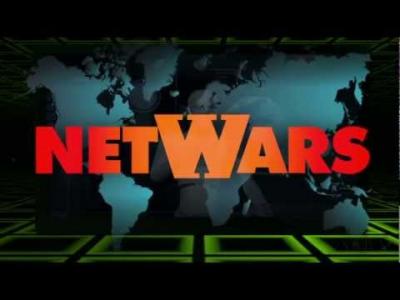 NetWars was an IPX-based 3D vector-graphics computer game released by Novell in 1993 for DOS to demonstrate NetWare capabilities. It was written by Edward Hill, one of Novell's engineers in its European Development Centre (EDC) in Hungerford, UK. Development had started in 1989. Since 1997, a much improved version named Advanced NetWars shipped with Caldera OpenDOS 7.01, DR-DOS 7.02 and DR-DOS 7.03.[2] It added support for SoundBlaster sound, Joystick control, up to six players in multi-player mode, missiles and computer-controlled ships in multi-player mode, and it featured a new multi-player shoot-out mode, an improved single-player mode, an external view mode, as well as a shape editor to design own space-ships.[2] Despite all these additions, the executable maintained a file size of less than 77 KB.