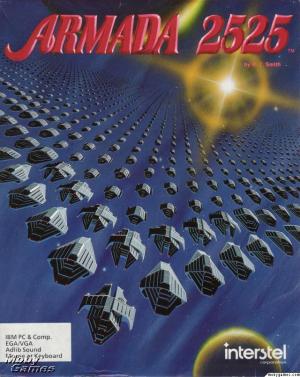 An early 4X space strategy game that foreshadowed the more recent Master of Orion I and II. The game can be played with 2-6 players, any combination of which can be either human or AI controlled. There is no real sound in Armada 2525, save for the occasional system beep. Game play can be either open ended or set to a specified number turns. There is no set objective to gameplay (except for your 4X's) and the story line is almost non-existant: It is the year 2525 and as your race begins its first step in extra-planetary colonization, you discover that you are not alone in the galaxy. You must compete with up to 5 other races in colonizing planets, and the near lack of diplomatic interaction in the game pretty much insures that you will need to build defenses early on. Unlike Master of Orion, diplomacy only occurs when an opponent requests peace, but you cannot make such requests yourself. Armada 2525 offers a fair assortment of ships (approx. 20) and buildings (approx. 15), which can only be built after the appropriate technological advance. One can build research labs which are dedicated to one of eight available scientific fields: weapons, construction, hyperspace, force fields, biotech, planetology, info science, and psycho science. Combat can be controlled to an extent - though you cannot affect the individual actions of ships, you can issue general orders and arrange them into formations. Your race will start at a predetermined homeworld from which it will expand to colonize new solar systems in the usual 4X quest of exploring, expanding, exploiting, and exterminating of your opponents.