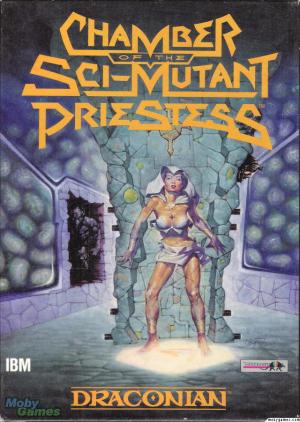 Chamber of the Sci-Mutant Priestess

Set in a post-apocalyptic world, Chamber of The Sci-Mutant Priestess casts you as Raven, a young "Tuner" (psionic mutant), working for the Tuner Netwerk. One day, while out on assignment with his friend Sci Fi, he witnesses the massacre of a "Normal" village, by a group of Protozorqs (physical mutants). Raven and Sci Fi disobey their instructions from the Netwerk, and fight back against the Protozorqs. In the ensuing struggle, Sci Fi is captured and taken back to the Protozorqs' mountain temple. Raven vows to save her, and so gets himself captured, too. As the game starts, Raven is a prisoner in the crazy Protozorq temple, where something sinister and utterly insane seems about to happen. Apparently, Raven has to go through five ordeals, to become a "Divo" (a Messenger Of The New Solution). For each ordeal he completes, he receives a Vort skull. Can you complete the five ordeals, save Sci Fi and destroy the fiendish Protozorq plot, in time? Chamber of the Sci-Mutant Priestess (originally entitled Kult: The Temple of Flying Saucers) is a puzzle-solving adventure game. To solve the puzzles, Raven will sometimes need to collect and trade items; but more often, usage of the eight "psi-powers" is required. These powers range from a simple light spell ("Solar Eyes") to instant-kill ("EV" - extreme violence) and complex psychological effects ("Brainwarp"). The five ordeals can be completed in any order, or even skipped altogether to reach a different ending. A time limit is imposed on the ordeals, and is calculated by turns. A "wait" command, which skips a turn, is also available.