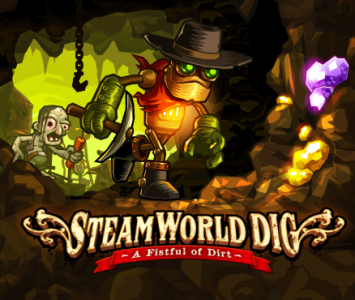 SteamWorld Dig is a 2D platform game that revolves around mining for resources and ores. The objective of the game is to investigate the mines underneath the old Western town Tumbleton in order to unearth the secrets lurking below. The player controls Rusty, a steam-powered robot who is equipped with a pickaxe, but can gain access to a variety of tools, such as a drill and dynamite. The player can upgrade the tools used for digging as progression is made in the game. Besides health, the player also needs coal for light, and water for special abilities. SteamWorld Dig has platform elements in that the player runs, jumps and encounter foes, but the main objective is mining. That means that the player builds – or rather deconstructs – the game world and creates platforms that way. The player collects ores and resources which can be brought back to the surface and exchanged for cash. When the player progress in the game new abilities are unlocked. Each playthrough, the mines are randomized, making items and treasure appear in different locations. If the player gets stuck there is a self-destruct function, but the players can also buy ladders in the store at the surface to get out of tricky situations. When progressing deeper down in the cave, the player encounters various enemies with different attack patterns and weak spots. The game features multiple subterranean worlds, each with a completely different environment. Dying results in a reparation penalty fee, and the player respawns back on the surface. All the loot that has been accumulated when the player dies can be picked up again.