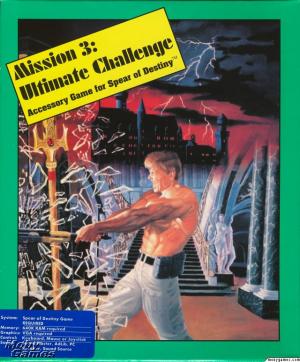 Mission 3: Ultimate Challenge is an "accessory pack" to Spear of Destiny released by FormGen Corporation in May 1994, which, along with the similar Mission 2: Return to Danger has been called the Mission packs of Spear of Destiny. As the Allies' top agent, you face your toughest challenge yet! Learning from his past mistakes, Hitler has expanded his subterranean command bunker beneath the chancellery in Berlin so that he can keep the Spear of Destiny nearby and well-guarded! Calling upon the dark forces of the occult, Hitler can see into the future and obtain the plans to future weapon systems! Having recaptured the Spear once again, Hitler has made a blood pact with the demon Abigor and has gained knowledge of future weapons systems. He has started developing them in his subterranean bunker. B.J. Blazkowicz is tasked to yet again retrieve the Spear and put an end to the Nazis' mad plans.