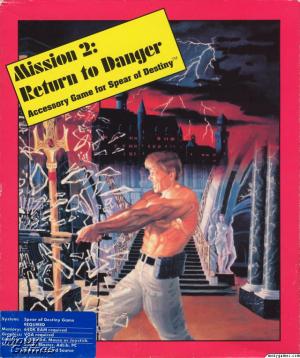 Mission 2: Return to Danger - Accessory Game for Spear of Destiny

Mission 2: Return to Danger is an "accessory pack" to Spear of Destiny released by FormGen Corporation in May 1994, which, along with the similar Mission 3: Ultimate Challenge have been called the Mission packs of Spear of Destiny. Six weeks after the Spear of Destiny has been brought out of enemy hands, the Axis mounts a successful commando raid to recover it! After a bloody battle and narrow escape, it's taken to the Nazis' Secret Scandinavian Base, excavated from the solid rock of a fjord. The fortress is said to be impregnable! The Nazis have recaptured the Spear of Destiny and taken it deep in the heart of their Secret Scandinavian Base. The base was built to carry out top secret scientific research, with the ultimate goal of creating an atomic bomb. B.J. Blazkowicz is once again called upon to infiltrate the heavily guarded base and retrieve the Spear.