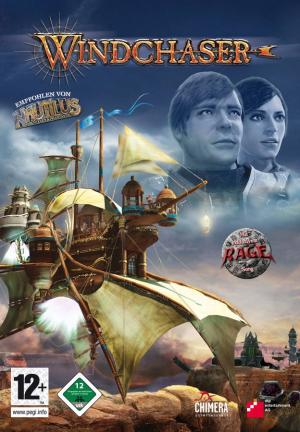 “Windchaser” combines an innovative genre mix of 3-D real-time tactics, a story based campaign, many fantasy role-playing elements and a pinch of strategy in the shape of a mobile headquarters. Together with the crew of an air-sailing ship, the player resorts to sword and magic to fight human opponents and battle an ancient, resurrected evil power. Only our hero Ioan with his spirited girlfriend Shara and an old soldier called Caine, can save the fantasy world Ensai from the upcoming apocalypse. Long ago a war devastated the industrial and highly cultured world of Ensai destroying most of their knowledge and achievements in the “Weltenbrand”. The few survivors turned their backs on the old civilization and with great effort a new society based on guilds was forged. Rediscovered, old, technological artifacts from the time before the “Weltenbrand” were used, and to today’s inhabitants of Ensai they seem like powerful magic devices. With the hero Ioan, the player takes control of the Windchaser, one of the mighty air-sailing ships that serve the guilds of Ensai as mobile bases. Using the Windchaser, the player recruits new companions which will advance in different character classes. Three different fighting styles in grouped combat allow the player to adapt and develop the best strategy depending on the situation and adversary.