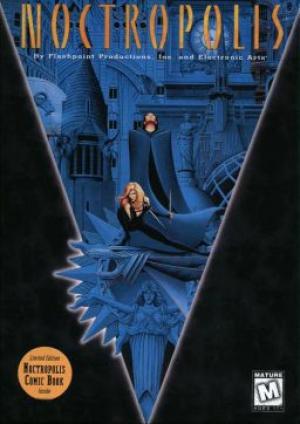 Peter Grey is a guy who owns a bookstore and is a huge fan of the "Darksheer" comic book series. Darksheer is a superhero, and with his partner Stiletto, a former supervillain, is the protector of Noctropolis, a city where it's always nighttime thanks to a permanent cluod of ashes result of a volcanic environmental catastrophe occurred decades before. One night, a courier brings Peter a package with the last issue of the comic book series and a golden coin, and the package transports Peter into the city of Noctropolis as Darksheer himself. The arrival of Peter as Darksheer occurs at the same time that five of the Darksheer's arch-villains decide to gang up on him after they're mysteriously released from incarceration. The real Darksheer had disappeared several weeks before the Peter arrival and nobody knows why. Helped by Stiletto, Peter, the new Darksheer, will must fight with the Darksheer's enemies, try to stop the evil plans of Flux, the mysterious mastermind who releasing the five supervillains from their imprisionment and, maybe, find a way back to the real world. -Toth-Amon, The Internet Movie Database