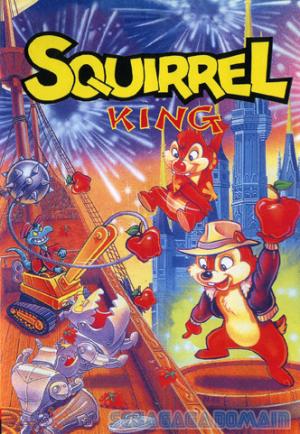 Squirrel King is an unlicensed platform game developed for the Sega Mega Drive. It was published and developed by Gamtec, and therefore its origin is Taiwan. Squirrel King is extremely similar to Capcom's Chip 'N Dale: Rescue Rangers and it sequel, Chip 'N Dale: Rescue Rangers 2 for the NES, to the point where the player actually plays as two characters named "Chip" and "Dale" (though they look slightly different to their Disney counterparts). C jumps, B picks up and throws crates, and A allows Chip or Dale to throw fireballs, assuming they have some in their inventory. Squirrel King is the basis for another unlicensed title, Super Mario World, also for the Mega Drive,but developed by Chuanpu and possibly published by Ming Super Chip Electronic