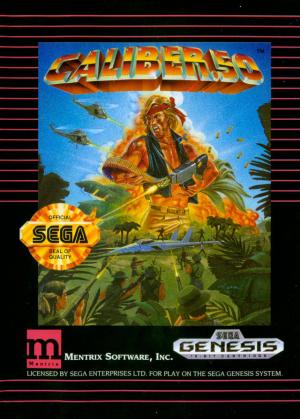 Caliber.50 is a top-down run and gun video game originally released in arcades (as Cal.50) before being brought to the Sega Mega Drive in 1991. The Mega Drive version was only released in North America. The Mega Drive version is severely watered down from the arcade original, not just in terms of graphics and sound, but also gameplay, as the controls need to be mapped to three buttons. This means unlike the arcade original B takes the roll of shooting and throwing grenades, A rotates left and C rotates right. The arcade cabinet used special joysticks which could be spun around to rotate the player. To compenstate, there are fewer enemies on screen, and the player is given a life bar.