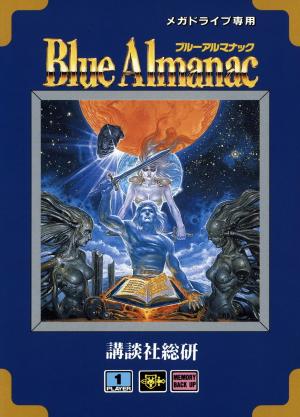 Blue Almanac (ブルーアルマナック) is a 1991 RPG for the Sega Mega Drive by HOT-B published by Kodansha Research Institute for some reason. While it was only released in Japan, Kodansha was planning on translating the game as Star Odyssey, but the translation was cancelled for unknown reasons. Two prototypes were independently discovered by drx and by Brandon Cobb, head of Super Fighter Team, who subsequently acquired a license to complete the translation from HOT-B successor company Starfish (who like to revisit old properties), with intentions on releasing it on the twentieth anniversary of the original release. Despite his PR claiming that he received an "unofficial license" from Sega to distribute the game, Sega really asked him to remove their copyrights and trademarks, consequently making the translation fully unlicensed (while Blue Almanac is fully licensed).