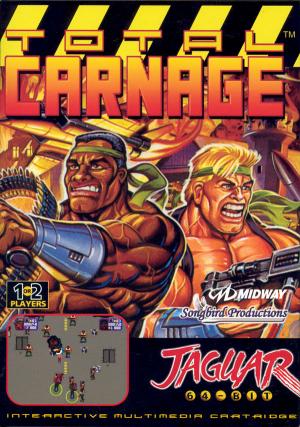 Total Carnage is the classic arcade game originally ported by Hand Made Software and licensed from long-time game publisher Midway. One or two players assume the roles of Captain Carnage or Major Mayhem in a tongue-in-cheek frantic assault on the dastardly forces of General Ahkboob. There is an unending -- often overwhelming -- number of enemies pursuing the heroes at all times, but thankfully there are also many powerups, bombs, and even missile strikes to assist players in their quest. Player strive to rescue civilians and collect valuable items such as keys, dogtags, and more. Total Carnage was never commercially released, but is one of the most complete Jaguar prototypes to surface in recent years. Songbird Productions licensed Total Carnage from Midway Games and released the game in cartridge form (complete with box, manual and label) in 2005.