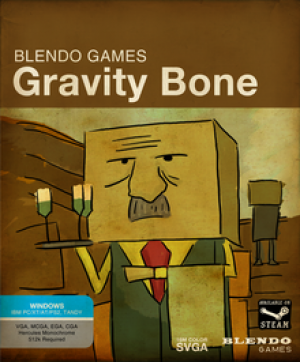 Gravity Bone is a first-person adventure video game that lasts for around 20 minutes, and is set in the fictional city of Nuevos Aires. The player controls an unnamed spy, and is tasked with accomplishing several missions across the game's two stages. Brendon Chung has stated that the label Citizen Abel guards no relationship with the character's name, although several sources have considered it as such. At the end of the game, the player-controlled spy is killed by an unknown woman after chasing her through the last half of the second level. The game was designed to leave the player without a clear idea of how the game's story evolves. During these missions, objectives and guidance are provided through the player's interactions with objects and environments in the game. The tutorial system used to demonstrate routine gameplay elements such as object interaction and movement is disguised as the first level of Gravity Bone. Here, the player is tasked with the delivery of a contaminated drink to an unspecified non-player character. After the first level is completed, the player is sent to the second level of the game, which follows the pattern of the first; the player is assigned a set of actions and goals involving platforming sequences.