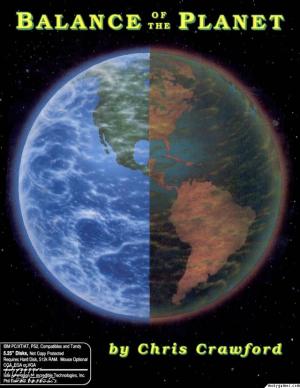 Balance of the Planet

Balance of the Planet is an environmental management simulation. It is the successor to Balance of Power. Chris Crawford seems to have a special liking for problems of global concern. Balance of Power dealt with politics in the cold war, its successor Balance of the Planet simulates nothing less than Earth's ecosystem. Although Maxis' Sim Earth is often credited as the first "ecosim", the title rightfully belongs to Crawford's game. Both games are equally interesting nevertheless, as they use two vastly different approaches to an enormously complex subject. Sim Earth tries to simulate the natural processes, i.e. continental drift, weather, global temperature etc. as accurately as possible, and calculates the global impact from this basic conditions. Balance of the Planet breaks down the ecological system into 150 single factors, connected in a cause-and-effect network. Rather than experiencing the ecosystem as a whole, you discover a string of subjects that influence each other. For example, when dealing with global warming, you'd be referred to carbon dioxides and methane (the causes) and rising sea level (the result). By following and understanding the links, you may thus find out in which way beef production influences inundation. There is, however, no accurate simulation of a global ecology, rather than a sophisticated schematic of factors and problems. Contrary to Sim Earth, you do not change the mechanisms of nature themselves. Instead, you're to try to influence society by funding and granting subsidies. If you raise the tax on coal considerably, coal burning and thus carbon dioxide output will be discouraged, but the strain on other forms of energy will increase. You'd be best advised to subsidise renewable energies -- which leaves less money for other pressing problems. Your job is to balance the ecology with the age-old system of reward and punishment. This has to be done in only nine turns; you are awarded or subtracted points, depending on your success. Balance of the Planet is highly customisable. You may not only load "biased" games, in which you play with a certain prejudice (e.g. pro-nuclear), but also change all the formulas used for calculations to your liking.