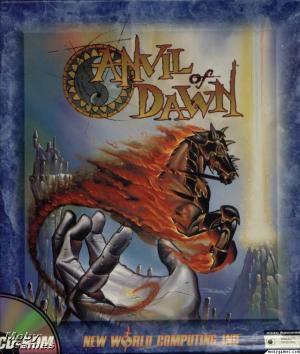 Anvil of Dawn is a role-playing game featuring pseudo-3D dungeons similar to those of Eye of the Beholder, but with solo gameplay and action-oriented combat reminiscent of Ultima Underworld games. The player controls a single hero (can be chosen between two female, two male and one lizard character) on a quest to destroy an evil warlord. The dungeons lead the protagonist through varied places like castles or shipwrecks. The game requires the hero to overcome two basic obstacles: combat and the exploration of maze-like dungeons with occasional puzzles (mostly based on switches and inventory items). During battles, the player simply needs to select a weapon or spell and click on the enemy to use it. This game doesn't use an experience point system but the "learning by doing" approach: using a skill automatically improves the protagonist's competence with it. Additional character development occurs by learning new spells (divided into earth, fire, water, wind, lightning, flesh and void disciplines), acquiring new equipment and drinking potions to permanently increase hit and magic points.